The TI-99/4A is the Home computer from Texas Instruments, and for those of you still with full hair, I should add that in the 1980es, a home computer was something like the PC nowadays. Technology was certainly on a far lower level, but we had fun, really. We learnt to write programs, got creative, and there were, of course, computer games back in those days. 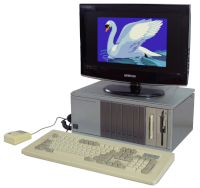 Software (to be added)

My dad got this home computer for us back in June 1982, when I was still 12 years old. It was about DM 1000,- (about €500,-). I found it pretty interesting; later I learnt that it was in fact the first home computer with a 16-bit CPU (TMS9900). However, due to some questionable design decisions, it could never live up to its potential. It never got a real chance to stand against the Commodore 64 which brought a plethora of games, and the story ended in October 1983 when TI "pulled the plug" and closed its complete home computer department. This affected some more developments like the TI-99/2 and the TI-99/8 which never left their prototype state.

Third-party companies continued to design and deliver new hardware and software. In 1990, I got the "super TI", the Geneve 9640, manufactured by the Myarc company. (No, don't try to look it up, it did not gain any attention outside of our community.) This Geneve still rests on my desk, in fact.

In 2005, I started my activities in emulation, after I got to know the UAE ("Unix Amiga Emulator", originally called "Unusable Amiga Emulator") for the Commodore Amiga, which we also had at home, in parallel to my TI stuff. A short time later I found the MESS project, which was a fork of the larger MAME project. In 2007 there were already some emulations available for the TI running on a PC, but MESS draw my attention in particular because it ran on Linux, which I am a fan of.

When I tried to work with MESS, I found it in a desolate state; people were using old versions because the current one just did not work anymore, and nobody seemed to care. With the source openly available, I started to track down the issues, and this brought me into the emulation community.