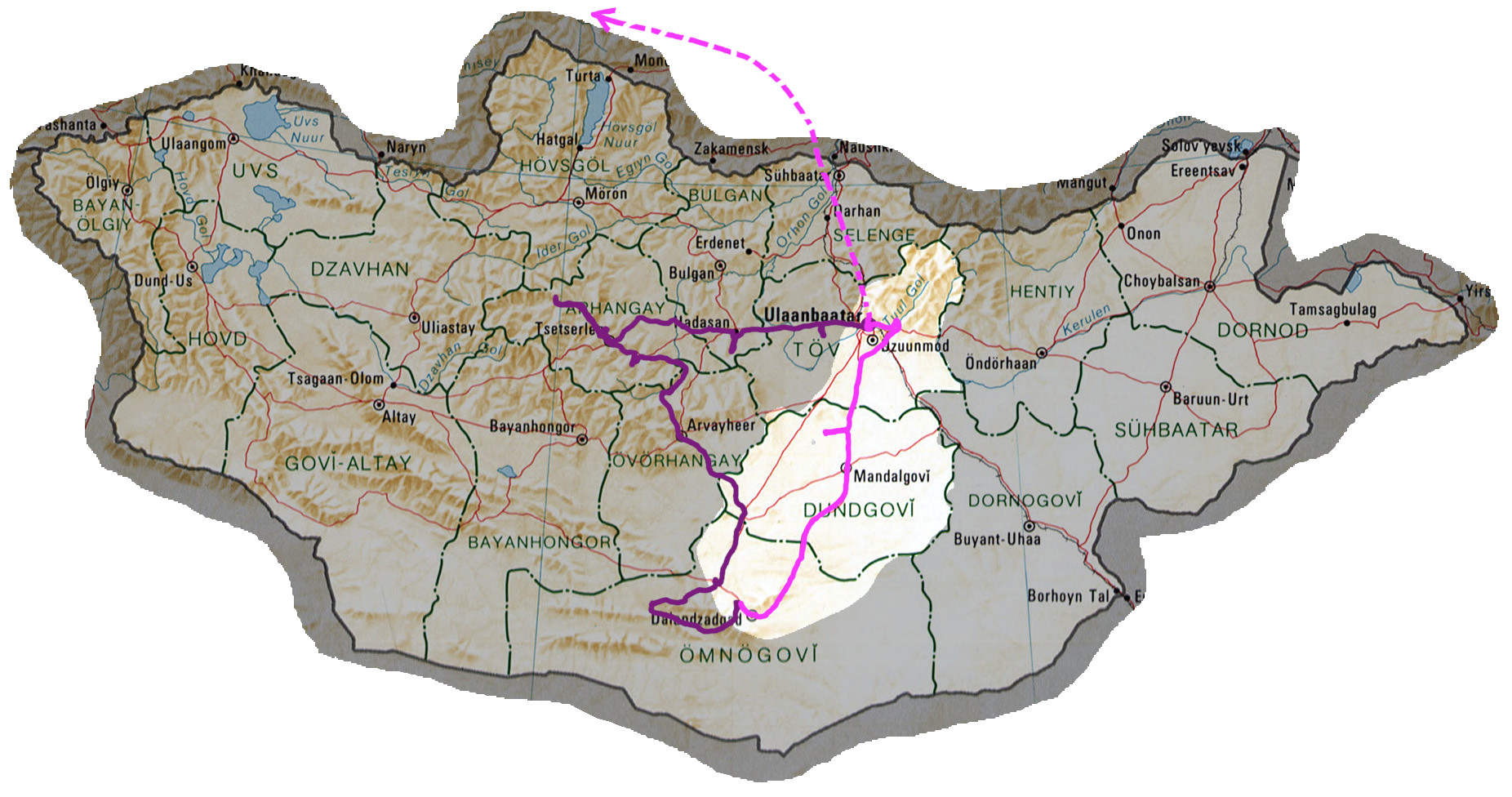 << Back to the overview

Part 7 of the trip: Dundgov', Töv, and back to Ulaanbaatar

This part looks bigger than the previous ones, but it is not true. We are traveling on a well tarred road, like a motorway, from the south to the north, and so we arrive at our next stops very soon. We have a quick stopover at Mandalgov', then we continue northbound.

Surprise: Something is missing in the yurt ... yes, it is the oven. Well, it is August, should not matter anyway ... except ... if you wake up in the morning with 11°C in the yurt. Later that day, we resume our trip in the direction of Ulaanbaatar, and the weather is getting worse the closer we get there. Some ice pellets gather on the windscreen.

Khan Khentii National Park (Töv). We arrive at the Khan Khentii National Park and encounter the huge statue of Genghis Khan, made of stainless steel. This area is said to be the birthplace of the Mongol Leader. What spoils the impressive look is that this monument was created in 2008; not really an antique artifact but modern history. We pass the Turtle Rock at the Terelj road and arrive at the last program item, the visit to the Aryabal meditation center. We enjoy a marvellous view over the grassy landscape.

Then we drive on to our last yurt camp, Mirage Tourist Camp. This time, the oven is back, but unfortunately, cattle left their droppings all over the place. In the morning we have a short walk around the camp, up to a point where we can see the Turtle Rock and Aryabal from the day before. It somehow looks like a mountain pasture, and there is even an Edelweiss.

Back in Ulaanbaatar. Our bus brings us back to the capital city, Ulaanbaatar. Before we drive to the hotel, we have a stop at the Mongolian Cashmere Center. I'm not really interested in getting a cashmere pullover, so I have a walk through the streets, and I notice that we are close to the Bogd Khan Winter Palace, which we know from the second day. Then we have another stop at the Ikh Delgüür (State Department Store), a huge shopping mall.

In the evening, our goodbye dinner is set, in a restaurant with a Mongol grill - what else? The guys are really skilled with their knifes at the hot plate, performing some artistic show. After that, we return to the Khabu Hotel, which was our first accomodation in Mongolia. Next morning, we pick up our luggage and head back to the airport. With a sunny goodbye from Mongolia, we fly back.