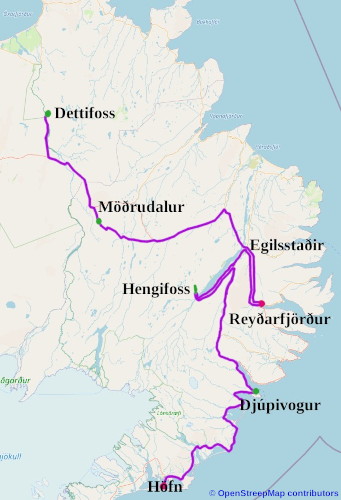 << Back to the overview

In Höfn, we are actually already far in the eastern parts of Iceland; now we continue along the Ring Road to the north. It seems as if the weather is getting better now, and the pictures prove it doubtlessly. At the lighthouse Hvalnesviti we have our next stop, with an impressive view of the coastline to the south and to the north. Our lunch stop is at Djúpivogur; the red restaurant is a typical trade house of the Hanse called Langabúð. Shortly after leaving the town, the pyramid-shaped mountain Búlandstindur passes by on our left.

Instead of following the Ring Road, we now drive along the Axarvegur road, which brings us to the Öxi pass. This route offers lots of impressions of the wild landscape of Iceland, including some sheep on the road. We drive along the road nearly up to Egilstaðir, but turn to the Lögurinn (lake) and get to the starting point of our next hiking trail. It leads us uphill to the Hengifoss, 128m high. Too bad that the weather has turned worse; the clouds of the overcast sky are hanging deeply above us, almost touching the waterfall's edge. This time I took pictures while descending; you just see more when walking down, compared to walking upward and looking against the slope. There are some more waterfalls, for instance, the Litlanesfoss between basalt columns, which looks even better than the Hengifoss.

On the evening we arrive at Reyðarfjörður, where we spend the nicht in the hotel Tærgesen. Next morning, we continue to the north and west. The Möðrudalsoræfi is an extremely barren area, like the surface of the Moon. In Möðrudalur we have a short stop; this is a very lonely settlement in north-east Iceland, and tourists typically have a stop there.

Finally we reach the Dettifoss farther to the north. This is a giant waterfall; the second largest in Europe. Another fun fact: This waterfall is shown at the beginning of the movie Prometheus. The waterfall is surely impressive, but the wind keeps blowing the spray over us; you don't dare to get your camera out of the bag.

There are some video clips for this section of the trip.