In August 2019 I took a chance to travel to Iceland for the second time; the first one is already long ago, 1996. This time I went for a Studiosus Hiking trip, 10 days (Iceland tours are quite expensive, so this had to suffice). The trip was from Aug 02 to Aug 11, 2020.

Temperatures went down to 8°C (we're talking about the beginning of August). So it proved to be a reasonable decision to take two jackets with me: a waterproof windbreaker and a thin thermo jacket. As for weather, Iceland is ... difficult. Some days give you sunshine, only to make you wet shortly after. On other days you have overcast skies and deep clouds, blocking your view of the mountain tops. Those pictures have a somewhat melancholic mood, at least this is the mood of the photographer, but on sunny days you can get tremendous shots which pay back everything.

This time I recorded our itinerary with OsmAnd and a GPX extension module. This proved to be really helpful, not only to find our where we drove along but also to determine where the photo was taken, and what it shows. 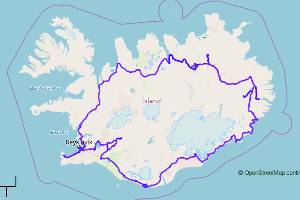 Note: When the map is slowly rendered, or when the browser slows down extremely and becomes jerky, you should allows your device some more time to finish rendering the map; the GPS track is very complex.

Here are my photographs of this trip around Iceland, organized in sections. Instead of a division by days, I chose a division by region so that each section contains a similar number of images.

Day 1-2: The Golden Circle is the standard route for short trips to Iceland. East of Reykjavík, the most important sights of Iceland can be visited in one day: Þingvellir, Haukadalur with the geysers, and the impressive Gullfoss waterfall. After that, we take a stop at the famous Friðheimar tomato farm, arguably the northernmost one of its kind.

Day 3-4: In the south, we visit far-stretching lava fields, driving over roads that lead straightaway over many kilometers, watch glaciers at the Vatnajökull, and puffins in the rock walls. Really nice: the Skógafoss waterfall in sunlight.

Day 5-6: The east parts of Iceland offer fantastic views along the coastline. We continue northbound till Djúpivogur, drive along the Lögurinn and wander uphill to the Hengifoss. In Reyðarfjörður we spend the night, and on the next day we reach the Dettifoss.

Day 6-8: We continue our trip in the north parts of Iceland. First we get to the Námafjall, an active volcano with many fumaroles and sulfur everywhere - and the smell. Next night is in Akureyri, we return to the Mývatn on the next day to wander up the tuff ring, and to relax at the thermal bath. On the next day we continue our tour towards Reykjavík.

Day 8-10: We arrive at Reykjavík. We visit the most important sights right on that afternoon, that is, Perlan, Hallgrímskirkja, Alþing, the harbour, and Harpa. On the next day we climb up the local hill ÚIfarsfell, and have a closing dinner in Reykjavík. Early on the next morning we get back to Keflavík.

The Icelandic language offers some intimidating long and seemingly complex words ... and this is said by me, a German, whose language is likely said to be somewhat dfifficult. But most of its phonemes are well-known to us, with Icelandic being a remote relative to English and German.

I will not list the full Icelandic grammar at this point, in particular because I actually do not speak Icelandic. I will only show as many bits as needed to help pronouncing the names.

Icelandic has similar vowels to German and English. Each vowel (except ö) is available with accent and without.

The accented vowels differ by sound, not by length or by stress. The accent is important and may not be left out (similar to the Umlaut dots in German which must be written). The vowels are difficult to compare with English, since English is the only Germanic language that underwent a heavy vowel change, making it hard to compare to any other language.

For consonants we have to distinguish single consonants from clusters. I will only show those consonants that are pronounced differently from English.